Worth knowing over the island of Bornholm. Bornholm is Denmark's fifth largest island

Worth knowing over the island of Bornholm

All places on 15Â° of eastern length have the sun exactly as the only authority in Denmark in the south point 12.00 clock, except for the summertime. Ertholmene are breadth min. north of 55Â° 19 and min. eastern of 15Â° 11 length. 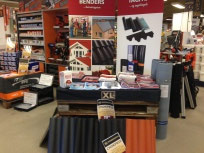